We've been delivering solutions since 1962.

In 1962, Elmer Jeske purchased Action Products, a wholesale company that sold door hardware, and the foundations of Jeske Hardware Distributors took root in Appleton, WI. Elmer ran the one-man show out of a small garage, shipping orders during the day and selling products at night.

Action Products began to expand, adding customers in both Illinois and Minnesota. To avoid being confused with other Action Products companies in the area, Elmer changed the company name to AP of Appleton. A few years later, the name changed again, and The Jeske Company was born. Elmer's sons, Jim and Jay, joined the team, first in the warehouse and then as salesmen. 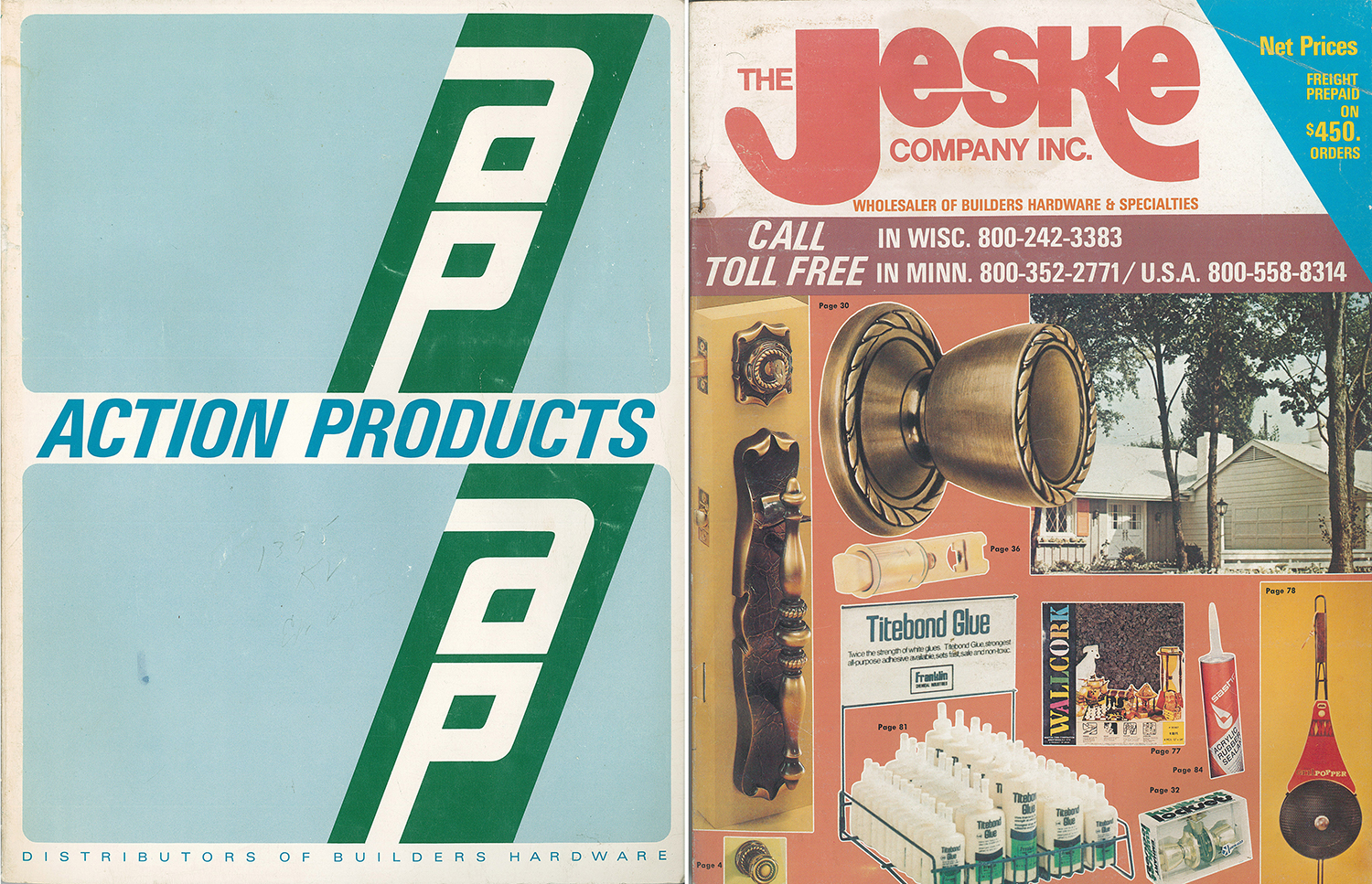 The company continued to grow, adding more sales and support staff. This growth brought new advances in technology and a need for more space. In Appleton, the company moved four times before settling on Capitol Drive in 1975. The Jeske Company was one of the first companies in the area to utilize mechanical order pickers and computers.

With an increasing Minnesota customer base, the company decided to add a warehouse in Eagan, MN. This allowed the company to bring its exceptional customer service and one-day shipping to customers in Minnesota and other Midwestern states.

Elmer Jeske passed away in 1988, and Jim and Jay took over the company. Since then, The Jeske Company has continued its steady progress, and a third generation of the Jeske family joined the team.

In 2001, the company opened a distribution center in Memphis, TN, expanding The Jeske Company's customer base into the southern United States. Over the next few years, the company moved its southern warehouse twice, finally settling in Southaven, MS, with extra land available for expansion opportunities.

Again, this growth meant improvements in technology at The Jeske Company, and, in 2002, the company implemented a new computer system, allowing the company to use barcodes and scanners to fulfill orders. This helped increase efficiency and reduce order error as the company continued to grow.

In 2009, advances in warehouse management, inventory control and shipping methods made it possible for the company to streamline its operations, and the Minnesota facility was closed. This helped The Jeske Company reduce costs and improve its customer service while reducing lead times.

In November of 2010, Jim Jeske, the company's president, passed away after a long illness.

Following Jim's passing, Erich Russ took over the president role and began steering the company toward new opportunities for growth, tripling its revenue and continuing to this day.

A commercial hardware department was created in 2011, and since then, the company's commercial business has increased dramatically. This increase led to additional expansion in the department, including DHC and DHT-credentialed staff to help with take-offs and commercial project quotes.

In 2014, the sales team began to focus on developing territories in other parts of the United States. Market development managers began cultivating new territories and building relationships in different parts of the country. Under the direction of the company's new business development manager, the sales team grew, and the business continued to thrive.

In 2015, the company saw numerous ecommerce opportunities and created a department to capitalize on this business. These new partnerships allow the company to meet consumers where they are, diversifying the business so it was not reliant on a single marketing channel.

Since the beginning, the company has always tried to embrace new technology. In 2017, a new enterprise resource planning system was implemented, providing resources to continue to grow in both traditional and new ecommerce channels.

In 2018, the company streamlined its focus, eliminating non-hardware categories from its product offering. This allowed the Jeske team to focus on what it does best: delivering hardware solutions for its customers.

Looking to the Future

With this new focus, the company continued to grow, adding additional hardware brands to its product offering and expanding its customer base across the country. With Jeske's continued expansion, it was important to have an identity that clearly communicates who the company is and what the company does.

In March of 2020, the company launched a rebranding campaign, and Jeske Hardware Distributors was born. Along with the new name came an updated logo, and a tagline that's more than just a marketing slogan: Delivering Hardware Solutions.

At the same time, the company began pursuing one its long-term goals: nationwide expansion. The company opened a distribution center and office in Sparks, Nevada. This new facility significantly reduced the company’s transit times for orders going to the western and mountain states. In addition, the Sparks facility also provides office space for local team members.

Shortly after the company’s expansion in Sparks, it became evident that the team was quickly outgrowing the office space at the Appleton location, and the hunt began for a new location for the company’s corporate headquarters. A new facility was identified just a few miles away from the Appleton distribution center, and remodel work began in the summer of 2022. The new office in Appleton houses many of the company’s teams, including the executive, commercial / multi-family, customer service, marketing, purchasing, and IT teams, and offers room for future growth.

Since the company's early days with Elmer, Jim, and Jay, the Jeske team has always helped its customers find solutions for their hardware needs. No matter what name has been on the building, the values that drive the company's success have remained the same. Today, Jeske Hardware Distributors continues to operate with this same focus – delivering hardware solutions. 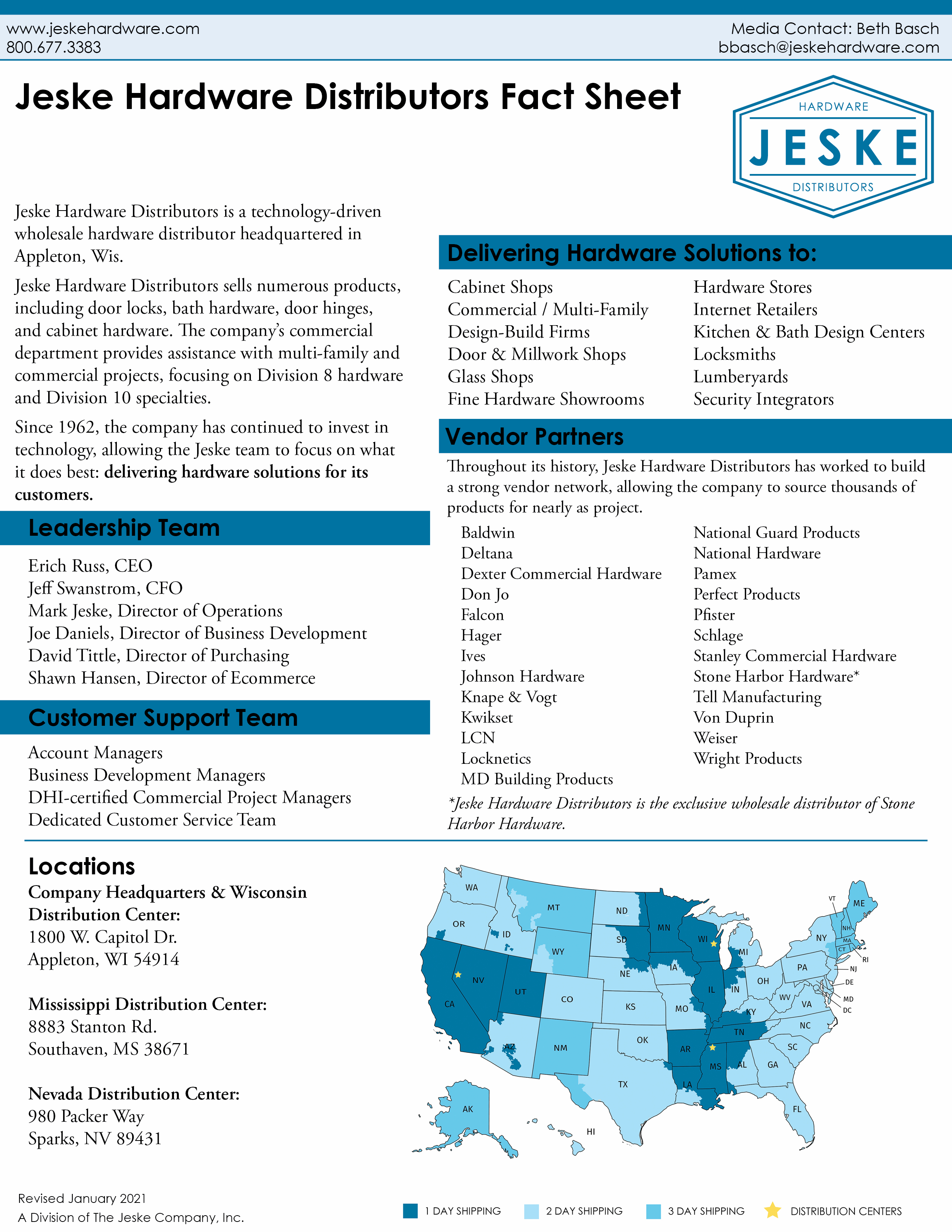